Brad (Michael Del Ray) is unsure why he received a cryptic invitation to a mysterious house. Because the whole situation is veiled in secrecy, he thinks he’s going on a reality television show. Upon arrival, Brad is greeted by a Maitre D (Lance Hart) who asks for his invitation and his cell phone. Brad is reluctant to give his phone up. He’s supposed to check in with his husband once he’s inside. Despite his reservations, Brad is intent on winning the prize if he is in fact on a reality show, and he gives up his phone.

The next guests to arrive at the puzzling party are power couple Toby (Michael Boston) and Robert. Being high strung, Toby is annoyed that they’re attending an event without information and Robert tries to soothe his lover’s frayed nerves. Brad approaches the couple and tells them his theory about the dinner party being a game show. After all, they were all flown across the country and put up in hotels for the evening. Attempting to piece together the significance of the dinner, the men discuss how they could all be connected.

As they brainstorm, Toby notices a very familiar painting on the wall. It was a one-of-a-kind piece owned by his ex-boyfriend, James Montgomery (Johnny Ford). Once he mentions James’s name, Brad says he knows a guy named James Montgomery too. He was his first fuck when they were eighteen. Brad tells the story of their steamy encounter, and we’re treated to a first-hand look at their virginal romp via Younger Brad (Trevor Harris) and Younger James (Johnny Hunter).

Once Brad finishes telling his story, the guys mill around the party. Brad is satisfied in knowing the link as new guests arrive. As soon as Brad sees Sebastian (Chris Damned), he asks if he knows James Montogmery. Unwilling to engage with the question, Sebastian walks away. Brad tries again, calling to a mysterious man lurking in the yard. The man ignores him too. Lucky for Brad, Kenny (Dakota Payne) joins the party and he’s more than willing to talk, much to Toby’s chagrin. Kenny is a party boy and Toby accuses him of sleeping with his then boyfriend James while they were still together. Kenny is unfazed by Toby’s accusations and goes for a dip in the pool. Liking what he sees, Sebastian approaches Kenny. Kenny recognizes Sebastian as a man-for-hire and Sebastian offers Kenny a taste…for free. Sebastian and Kenny sneak off to a walk in closet for a little oral fun.

After they have sex, Sebasitan and Kenny join the rest of the guests at the dinner table, where the Maitre D is serving dinner. Brad tells the Maitre D that they have it all figured out and that James is the host. Robert and Toby ask if they can hurry the evening along now that they know. No dice. The Maitre D tells them all will be revealed soon enough. 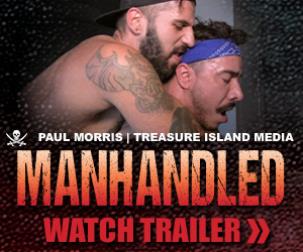