The maddening thing about summer is that sexy young businessman still stay suited in the hot weather. All we can do is lust after the damp patches that appear in their armpits and the tight fit of their trousers over their curvaceous bums. Well we’ve fucking had it and when Dave spies a hot city boy he’s determined to have him even if he needs to drag him back into his lair. Once Austin is secured in place with his legs akimbo there’s nothing he can do to stop the pervy man groping his body over his expensive suit. This privileged well raised young man is so shocked at his predicament all he can do is flail in desperation at the man’s rough hands grabbing his gonads and peachy arse. That pristine suit is destroyed until he’s in nothing but his tempting white pants which barely conceal his cock and arsehole. Dave rams his fingers up his fuckhole widening this straight boy’s virgin arse and he makes Austin sniff the sweet stink of his own bum. Burning with desire for his hot hetero cunt, Dave rams his massive dick up Austin’s tight hole and breeds him with absolute rage. He shoots a massive load of spunk all over this city boy’s crack and bumhole while all the restrained is moan in anguish. And that’s how you turn businessmen into dirty fucking whores!

BreederFuckers – Daman Stripped Out Of His Suit Bound & Flogged 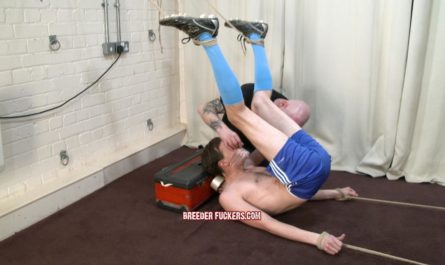 BreederFuckers – Lucas Fucked In The Chair

BreederFuckers – Scally Lad Lee Stripped Out Of His Trackies & Fucked!

BreederFuckers – Vincent Strung Up & Fucked In The Hallway