But the tough men aren’t finished with this disgusting little public cockwhore. They clamp up his sensitive bits, adding clips to his foreskin, which get yanked and secured to the bars, along with his nipples, which are stretched to their limit by the unforgiving ropes. Even his balls end up with a row of cruel pegs on them. To round off the boy’s misery, a couple of men step up and spurt a stinking stream of hot piss all over Peter’s face and hooked up ass. How long they’ll leave him in this painful, humiliating predicament is entirely up to the tough leather men, but with the gang clamoring for a fuckshow, it’s only going to get worse for him.

BreederFuckers – Liam Gets A Rough Fucking 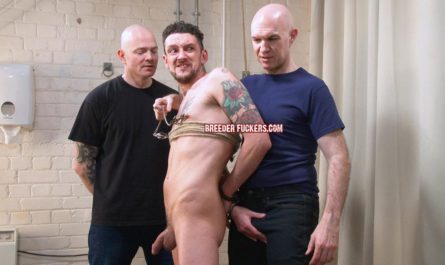