Despite being vulnerably strung up and shackled naked, smarmy young Chris still gives us a lot of lip. This proud fucking hetero needs to learn to submit and respect us or we’re going to make him feel more pain than he ever thought possible. We knock the wind out of him delivering swift punches to his gut and shut him up by gagging his filthy mouth. Chris’ massive dong is so fucking sensitive that he can’t stop getting a fat woody from being tugged insistently. At the same time Dave punishes Chris by tightening a rope around his neck and making him gag for his breath. The rope tightens as more weights are added and his erogenous buttons are manipulated as his cock is rubbed. His sex drive is now fully under our control and this straight bastard has no way of preventing his erections. As a massive fat dildo is rammed up his aching arse and his cock is jerked, he shoots a massive load. Chris weeps with shame and blushes red all over knowing he’s been turned into a huge homo having ejaculated under our expert manipulation. 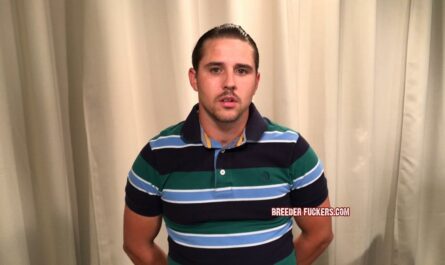 BreederFuckers – Aaron Fucked In His Jockstrap