Psycho schoolboy Edward proves to be a harsh new Master during a mind-numbing history lesson. He’s bored senseless by pathetic sub teacher peter’s moronic facts and figure so decides to teach the cunt a lesson that he won’t forget by humiliating him and using him as he sees fit. Something tells me this is going to be the hardest session of this sub’s pathetic life so far. Roughly manhandling the feeble, skinny idiot the moaning sub is rammed to the floor to lick the Master’s shoes. He has to give extra attention to the soles which are mired with filth.

Tiring of this, Edward gobs all over the ugly face of the sub and into his open mouth. A cane then appears which is used to lash the now naked sub’s tender arse cheeks. Deep, red welts appear on the white skin. The schoolboy Master’s dick is stiffening quickly and he orders peter to tip his head back ready to suck it. Edward whips out his cock over the top of his underwear and peter services him using his dribbling mouth. He has to suck it deeply and make Edward’s dick harder and harder. This top is clearly not going to be an easy-going Master. Peter reams on the big, fat dick as it’s pushed deeper and deeper into the sub’s obedient little mouth. Thick spittle dribbles down his chin and peter gets his reward for being a good little slut. Maybe this sub has some uses after all. 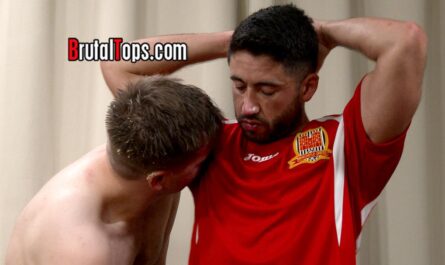