Suited and booted Master Wayne returns to BrutalTops and finds pathetic naked sub elliott waiting to be treated like shit. In the corner of an office he quivers as the sadistic Master begins his onslaught against him.

The sub is on his knees and meekly licks the feet of the Master. Ordered to remove Wayne’s clothes the sub reveals the Master’s impressive bulge and firm body. He is then ordered to suck Wayne’s feet and the top rams his long smelly toes into the back of his sub’s mouth. Elliott murmurs his objections quietly to himself. 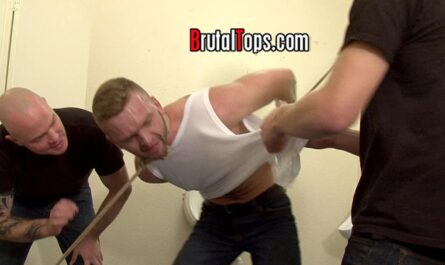 BrutalTops – Masters Dave & Derek Fuck Their Sub In The Toilets

BrutalTops – Master Mark – DO AS I ORDER THEN SUCK MY HARD COCK, WORM

BrutalTops – Master Charlie – PATHETIC WORM, GET ON YOUR KNEES