At BreederFuckers, big arrogant straight stud’s like Kevin like to live the high life. Fancy suits and fast cars bought on credit. He has no way to pay for this flash lifestyle when his debts are due. The doctors are in to make this masculine fucker pay by performing a very unusual procedure on his body. Kevin is bound in the operating chair and disrobed from his suit. All that’s left are his skimpy white designer pants. Dampen them slightly and it’s like looking through a window at his tight hetero anus. His pants are torn away revealing his arse fully. The doctors fill his anal cavity with water and to prevent any of it coming out stuff a butt plug up his rectum. Now his insides are under such pressure Kevin can barely stand it. Dave skillfully manipulates his cock until he grows a big throbbing erection. Noticing what a big opening his pisshole makes they amp up the punishment by sliding a rod down his urethra. Kevin is totally overwhelmed with the pressure building in his anus and his cock being fucked. This is when his dick is seized and pumped insistently till Kevin releases a load of fresh semen all over his stomach and chest. At the same time the butt plug is yanked out released all that built up water pressure. Kevin is left dizzy from the overwhelming sensations inflicted upon his body.

BreederFuckers – Kirk Bound Up & Fucked In The Locker Room 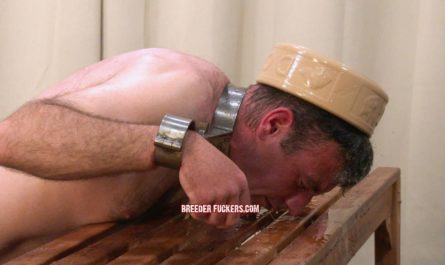 BreederFuckers – Young Martin Tied Down & Gets His Cock Milked 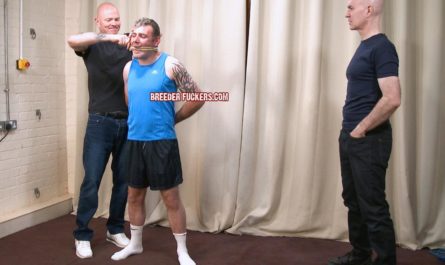